1. I went to Botcon this year. Photos to appear soonish... 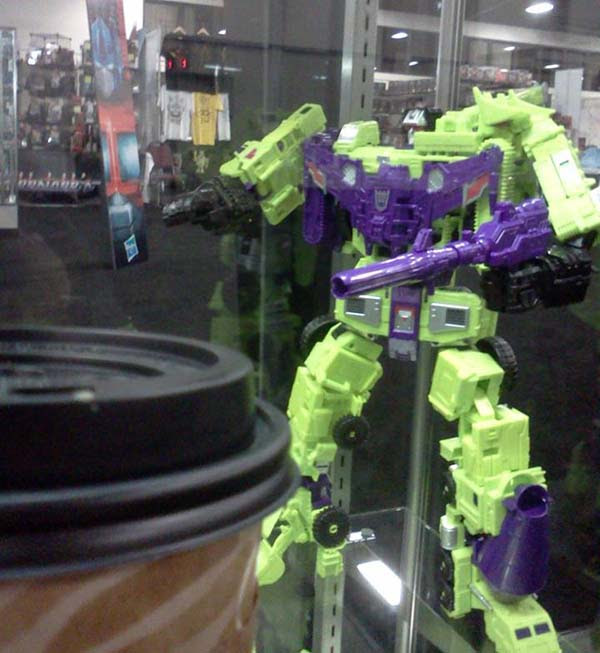 2. ...but maybe on another site. Maybe on a specific site where I do specific thing.

That site being (drumroll) ROBOTS WITH COFFEE.

So, after about a year of activity on FB and Twitter where I got to meet people and go places because of the dopey robots and pictures of toys and coffee, I decided I needed to do something to centralize Robots With Coffee and maybe make something of it beyond me (and some friends) taking pictures of coffee. There's a fake robot cartoonist we all know and love who needs a home, for starters. But there's some other things that I've wanted to do for a long time and RwC presents an opportunity to do so. I enjoyed making Everyone Loves Gears but as I got better at making those, I realized I could shoot higher as far as an actual story and with more than just one gag through the whole thing.

I'm also buying fewer toys. I like Alpha Bravo, I'm glad everyone digs Combiner Wars, but I'm either not impressed or just plain not enjoying it. It's not for me. And at the Botcon reveal of Sky Lynx The Combiner, well, is every G1 character going to be turned into a limb? I'm sure it's successful and Hasbro is enjoying the returns. I hope they are! But beyond Victorion (and even she herself) I'm not interested in anything that's not a new character or G1 that hasn't been Classic/Generation'd yet. Maybe we'll get more Headmasters like Brainstorm. Maybe I'll get Devastator. I don't know!

But if I get more figures, I'll mention it or even review it here. If I find something funny, something interesting, maybe I'll talk about it here.

I like my action figures! I love "the guys!" But I love what I tripped and fell into a few years ago. So I'm gonna work on creatin' something and run with it, even if it means...at the expense of my collection. OH NO! Not really.

So go to Robots With Dot Com Money every day and look at the comics and some classic (and new) robot coffee pics. Stay tuned. I'll update big developments here if they happen. If I can't get the big plans off the ground, I'll be happy happy to keep drawing some silly strips and posting silly robot coffee pictures on the site, and on FB and Twitter.

That's it for now. Some Botcon pics soon.
Posted by Unknown at 9:14 PM