That's the news. There's a lot of news. Much thanks to Collecticon and Radio News Cybertron and all the good people who went to Toyfair on Valentine's Day to report on and take pictures of toy robots.

Then there's Devastator. That's a link to TFW2005 by the way. Not Prowlestator, which a lot of IDW fans would love. It's as G1 as you can get. The complaints from the internets: some of the figures don't have elbows or knees (or both). I'm not paying attention to who doesn't have what. You can probably figure it out from the pictures. Because of the size and the combination, there's some hollowness to the figures. A lot of recent Voyagers seem hollow and clunky and maybe the Constructicons would be in the same way. Then there's the issue of Devastator's head, that it's too small. And it looks pretty small.

I'm looking at the photos and reading some of the comments from people staring at Devastator at the convention and the whole thing looks pretty awesome. That Scrapper is as tall (or even taller?) than G1 Devastator? He looks solid. Solid and hilariously G1. I'm so glad that I didn't buy Hercules or Giant. Those figures looked cool but as individual figures they didn't look like their G1 selves. How important is that? For me, a person that a toy corporation doesn't need to cater to, I'm stoked.

But where are the balls? Like in the movie?

And then Ultra Magnus? I heard there'd be a new one, but meh. I have no interest in more Ultra OH WAIT, this one is based on MTMTE? IT WILL HAVE A MINIMUS AMBUS FIGURE? Yes, it includes a Minimus that fits inside of Ultra Magnus (who has giant shoulder missiles that become part of a hammer). The only think I can think of is "oh, wouldn't it be cooler? If it were the kind of thing where Magnus was really a suit that you put over Ambus' legs and arms, and not a Battletech or Titanfall type figure that Minimus is basically a pilot of? I know that that's not the intention, but still..."

But still. Happy smiles all around. Kudos to Hasbro for giving it a shot and especially to all the people who work on the IDW comics for not just making great comics but for influencing the toy corporation to make the toys this way.

Gush gush gush. Okay, seriously, next post I'll be writing about what I think of Superion, mainly CW Firefly.

NOT RELATED TO ANYTHING: I doodled Trailbreaker on a date with Mistress of Flame, a character featured in the (hopefully) ongoing Windblade series this summer. 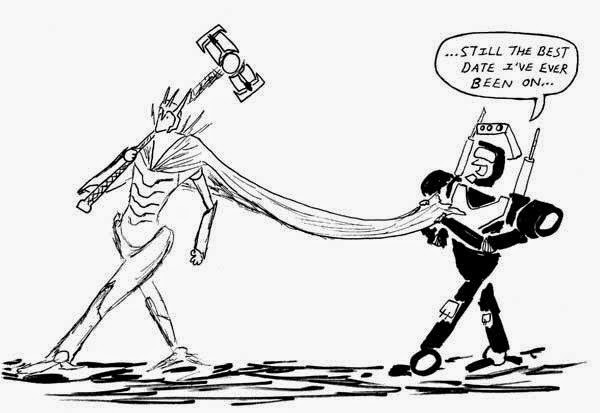