So a little while ago Brainstorm was available on Habro Toy Shop so I ordered him and he arrived shortly after. How awesome is he? 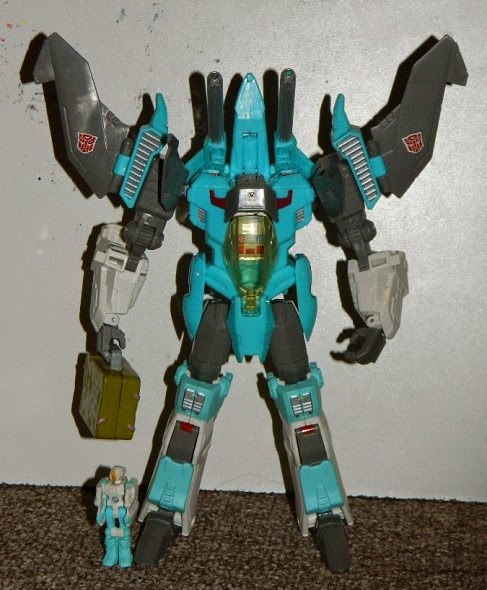 Pretty awesome. His alt mode? Whatever. It looks like something from the Star Wars prequels. The headmaster's head looks like it's about to snap off. Aside for this photo, I won't be removing it from the body. Unlike his the other Generations Voyagers that came out this year, there's no sticker sheet, so there's nothing to break up the teal, white, and gray color scheme. The briefcase is Lionel Hutz'. ARCEE! This version's hands are 'open.' Vehicle mode is meh. I was worried that this was too similar to the Impossible Toys figure from a few years ago, but it's instead vastly superior, at least in figure mode. She's still a bit of a shell former and the shell that makes the front part of the car is too close to her transformed body to hold the blue swords (like Animated Arcee). Anyway, it's great to finally have an official G1 themed Arcee (even though I would have dug the recent IDW version). 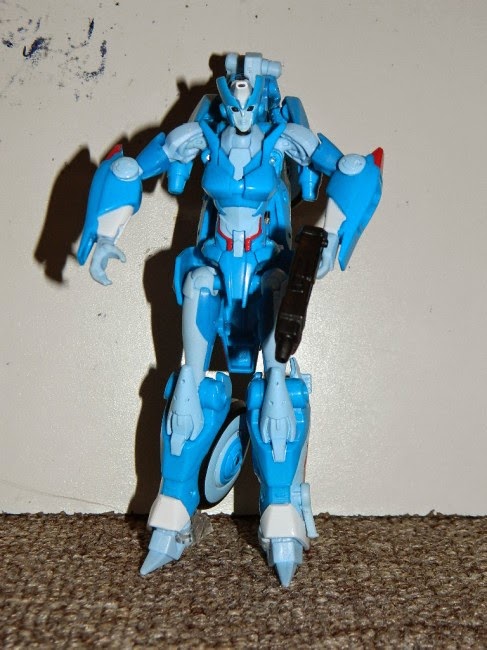 Pretty great figure. The legs pop out from the hip ball joint very easily, but not with any damage. The real problem: be careful with the upper arms' elbow joint. When you turn her forearms, you can feel them resist and...will it stress the ball joint and break it? Taking off the upper blue shield bit might help. The front wheel 'fork' on mine has already started to curve. Great figure, neat motorcycle design.

From "good to great" isn't a mixed bag of description. You've probably seen several complaints about recent Hasbro Generations figures being flimsy to hollow and clunky. If you're on the fence about Brainstorm, well, it depends if you are a fan of More Than Meets The Eye, in which case it's a no brainer (or YES Brainstorm! get it?). Chromia is cool but some of us clumsier fans are going to break those arms or lose pieces transforming. I don't care for having to transform Arcee and struggle with fitting the hips into the car shell part, but her robot mode is very sturdy.