Mort Inkingbot and speculating on MTMTE 32 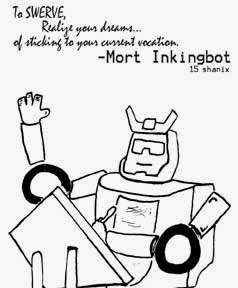 That's Mort Inkingbot, everyone. He used to draw a syndicated comic strip for various Cybertronian newspapers, mostly with pro-establishment, pro-functionist messages, sometimes veiled and sometimes not veiled all that well.

Just kidding. I made him up.

In the meantime, the highly anticipated (and dreaded) More Than Meets The Eye #32 came out this week. I have a few thoughts. Just a few, because #33 will answer the 'what the heck?' Hey, it's after the jump because, you know, SPOILERS. Major goshdarn spoilers.

You have to have read 31 to know that everyone on the Lost Light's departure from Cybertron, mainly the accidental jump caused by Shock (or Ore) standing too close to the engines, disappeared, leaving the bots who joined the crew after. Megatron & friends remain in the Rodpod, only to come across a wrecked version of the Lost Light. And then...season 1 sadness.

Soooooooo, the way I read it:
1. The quantum engines present another possibility for the Lost Light crew, an 'alternate timeline' experience where the engines worked properly, the crew went on some adventures, Overlord didn't escape the basement and kill Rewind (HEY, I SAID "SPOILERS!" C'MON!), etc. etc. until they bump into Tarn & the rest of those DJD goofballs...a POSSIBLE occurrence, based on what Nautica was describing in #31. How they'll get out of it, how long this will go on for, I don't know.

But in the 18 months or 2 or 3 years that the LL crew has been zipping around and then waiting for Megatron to use a loophole to delay his trial, the engines presented another reality (or existential possibility) where the crew zipped somewhere else and went on another set of adventures BAM hello DJD, except that that's not OUR crew and everything will be fine just like the cover to #35 says (*sobs*).

Of course, Nautica's exposition could be a misdirect.

2. This is the Lost Light of the future. the wipe-the-slate clean, Marvel Comics Underbase Saga style, to eliminate the Season 1 cast and replace them with Season 2. Just BOOM, dead. So much for the characters you enjoyed, here's Riptide, Nautica, Getaway, Megatron, Ravage, Nightbeat, and Skids (the holdover from Season 1). Every fan claims that Roberts & Milne are Death, Destroyers Of Robots, but it was Last Stand Of The Wrecker that had the almost indiscriminate body count where Everybody Dies. I think MTMTE has more hope than that.

Of course, these are FICTIONAL characters. Think every other episode of Sealab 2021 on Adult Swim where the cast just kills each other off or destroys the world and then next episode they're all okay until they maim and kill each other for laughs some more. They're not REAL. It's ME (and a lot of other people) who is attached to FICTIONAL ROBOTS, the ones that were (are) invented long ago to sell toys (and were killed off in another medium to make room for a newer set of toys). I'm not trying to bait them on the off chance they read this and they decide to just kill off everyone FOR REALZ (in FOR REALZ fiction).

Maybe it's not Bo & Luke Duke getting replaced by their cousins, or the cast of Airwolf being replaced. I think the team cares about the stories presented about, by, and through the season 1 cast, and there's been closure and there's still some SEEDS PLANTED from season 1 that need to blossom. There's also clues within that, my opinion, maybe support my first theory. But maybe Season 2 is going to be a long haul revenge adventure (revengure?) of Megatron, new crew, revived Rewind (supporting the first theory, but I've been wrong before, so) going after the DJD until it was JUST A DREAM and the quantum engines resume and the Season 1 cast is back etc. etc.

Lots of clues abound. With Milne back on the art after a guest fill in, the panels usually are filled with more clues that you need to reread a few dozen times to pick up...especially after all is revealed.

Or:
3. I was right a few months ago and this is a very elaborate plan by Mirage (I'm not right).

or:
4. Like in Spotlight: Hoist, this Galactic Federation educational facility has one of those robot nightmare deflectors to keep Cybertronians away.

Okay, other observations:
1. Nightbeat & Nautica make a great team. Like Nick & Nora. PLEASE WATCH (or read) THE THIN MAN.
2. Megatron gets pretty bummed when he finds out that Ultra Magnus was somebody else. The few scenes with the two in World Shut Your Mouth hint at a budding friendship. No, really. Maybe Megatron always respected the various incarnations of Ultra Magnus over the years?
3. I think that, among the dead alt-mode bodies, there's another clue: "PIIIIIIIPES!" But where's Whirl & Cyclonus? I have to reread this a lot to see if they're in that scene or other places.

Okay. That's it for me. There will be better theories soon, I'm sure.
Posted by Unknown at 9:36 PM